Who is Luis Medina?

Born in Córdoba and settled in Madrid from a very young age, he is part of 3 generations in the world of communication. At the age of 5 he was already exploring the sets and accompanying the Spanish Television reporters with his mother producer.

With 25 years of experience in the audiovisual sector, he began his career and training between London and Madrid in large communication groups. Always linked to work groups for the launch of new audiovisual media.

In 2006 he was the audiovisual manager of the first DTT channel (esmadrid television) that aired in Spain on anamorphic 16/9. An exclusive city promotion channel with 24 hours of cultural and touristic content broadcasting.

For 12 years he has been directing audiovisual production teams at the Madrid City Council, with more than 20 international awards in his productions, of which 3 Promax can be highlighted, as well as numerous awards and mentions in the audiovisual of tourism promotion.

The tear and pain in the “cante jondo”. Joy and happiness in the “Sevillanas” and in the “rumbas”. Flamenco is all this, and much more. Always with passion and intensity, qualities that make its expressiveness is captured by anyone, come from wherever it comes, understand or not the language. Because through this art the feelings arise to the flower of the skin. Who never got excited about the shoeing of a dance, or the whine of a “cantaor”?

Madrid is the capital of flamenco. Nowadays, “tablaos” and bars have perpetuated this tradition and offer the possibility of enjoying the purest flamenco night, while enjoying an excellent dinner or a good glass of wine.

The video Flamenco Madrid, produced by the in house team of Madrid Destino competes for the title of the World´s Best Tourism Film in 2018. This piece wins 15 Awards in the CIFFT Circuit Festivals and reach the second place with 80 points at the 2018 CIFFT Rank List.

Alexander Kammel spoke with Luis Medina to better understand the success behind the video.

"Madrid Destino is the public company of the Madrid City Council dedicated to the cultural, tourist and space management and events of the city."

AK: Can you explain what is Madrid Destino? Why an in house team and who they are?

LM: Madrid Destino is the public company of the Madrid City Council dedicated to the cultural, tourist and space management and events of the city. More than 600 employees manage three Theaters, four Cultural Spaces, one radio, 16 spaces for events and 4 tourism areas for the promotion and attention of our visitors. These are new times where sustainability and the efficient use of resources are a main axis in corporate strategies and communication, especially in the public administration because it belongs to everyone. And we know from the data we receive of the importance of audiovisual communication. Today 80% of online consumption are videos. Therefore it is important to have production equipment and hybrid production systems where the creative core resides in house outsourcing some resources. In Madrid Destino, specifically in the audiovisual department of the communication area, this nucleus is made up of two filmmakers, a sound technician, a graphic designer, a production assistant and a production director.

AK: You produce hundreds of videos per year… What can you tell us about the video Flamenco Madrid?

LM: That's right, last year we produced around 340 audiovisual projects, including cultural and tourism promotion videos as well as visuals for outdoor media such as giant LED screens distributed by some national and international cities or circuits of street furniture screens. We must bear in mind that technology takes us more and more towards the multi support, that is to say, every year we have in our campaigns more supports with image in movement, the natural transfer of all the urban furniture with spaces for advertising in most of the cities will be in a short time only for video.

Among these hundreds of videos one of the recurring projects is the flamenco video of our city, its production coincides with a festival of this art that happens in May in our capital. In 2017 we decided that the promotional video of the festival and the tourism promotion video would be the same.

Therefore, to link destiny and flamenco, we resorted to a typical Madrid song of a musical style called chotis and composed by Agustín Lara, a song that reflects in its lyrics the open and welcoming character of our city. We only had to change the style of chotis to flamenco and for that we have the composer Ricky Rivera and the singer David Palomar, great emerging artists of our flamenco.

That was the base where we built our multi award winning video.

AK: Where did the inspiration for the storyline come from?

LM: When we were in the creative process of defining the video, the LA LA LAND movie premiered and showed us an urban, modern and updated musical that was just what we wanted to show in our New Flamenco. We start from that style to create the narrative that is based on the meeting of the artists coming to our city in different efficient means of transport. The rest is the merit of the artistic team and the making of the film. 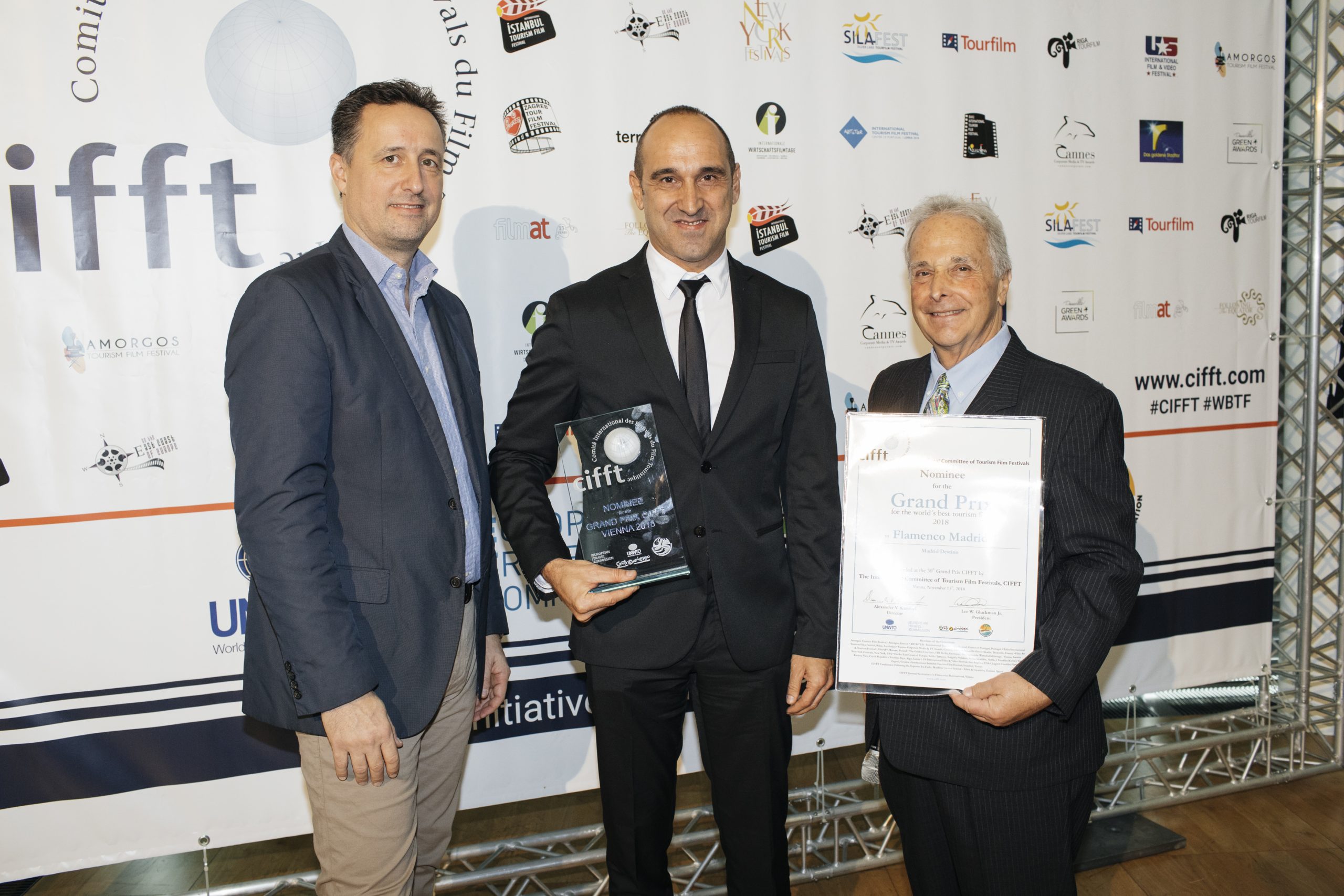 AK: Could you describe the audience’s reaction to your film? And can you give us some impressive numbers?

LM: The video invites you to discover a city where we will receive you with joy, dance, spectacle and incredible places to visit, under this premise the first impact is always positive but what everyone tells us is that the video is an injection of positivity and joy which encourages people to enjoy life, art and culture. We lost the account because the demand for the video had to be published organically in many RRSS and online media. But we know that it has more than 7 million views in total and more than 80% positive comments.

AK: In your opinion which feature or part of the film you believe that pushed up the film to reach the impressive numbers and results?

LM: I do not think there is a specific part of the video better than another, the piece is a set of elements from music, rhythm, photography and realization that complete a very balanced work.

AK: Nowadays everyone is saying that video is a powerful tool to promote a destination. What do you think about it?

LM: Undoubtedly, the objective of the video as a piece of destination promotion is fulfilled precisely because it does not promote the destination in a clear and explicit way but encourages you to get to know the culture, music and art of our city only with the sensation it conveys to you.

AK: After your success in the previous edition, can you tell us what makes a good film to promote a tourism destination and if you have any magical formula?

LM: Unfortunately we do not know that magic formula but we try to do different things every day, every month and every year to capture the attention of our visitors because we know that once you are here you just want to return.

AK: How important was for you to compete in the Grand Prix CIFFT Circuit?

LM: The Grand Prix CIFFT Circuit is one of the most important measurement tools and also an excellent promotion of destination promotion videos. We must bear in mind that a video within this circuit will be evaluated by the best professionals in the audiovisual industry of tourism and the tourism sector. Therefore it is an ideal thermometer to know if you are doing well in communicating your destiny.

AK: What message do you want to leave to all that are thinking in join this worldwide competition?

LM: It is imperative that this type of film travel and compete to help the global impact that the communication of your destiny needs, apart from the prestige and the impulse that your audiovisual will achieve.

“…it has more than 7 million views in total and more than 80% positive comments.”